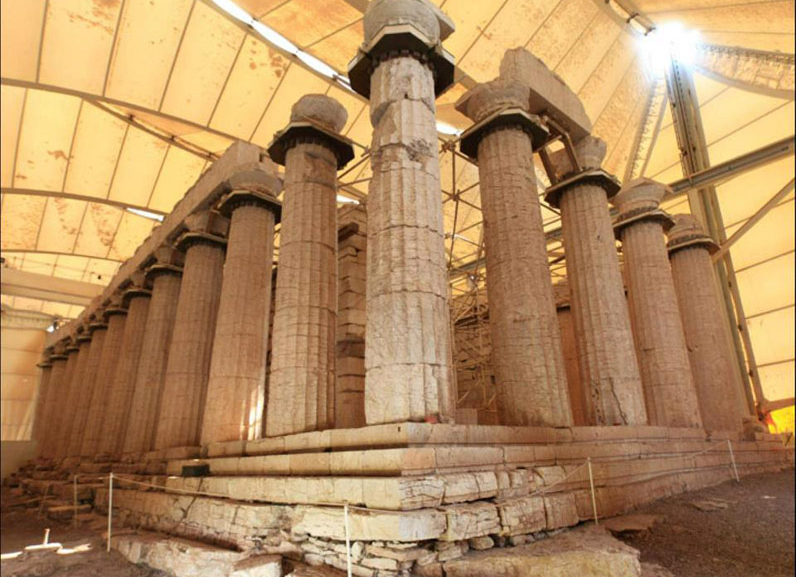 Isolated as it is in a conserved environment, the Temple of Bassae is an outstanding example of a Hellenic votive sanctuary in a rural setting. It represents a unique artistic achievement, remarkable for its archaic features (elongated surface, an exceptional proportion of 15 columns on the longer side and 6 columns on the facade, and a north-south exposure), and for its daring innovations (the use of Ionic and Corinthian orders for a Doric edifice, the variety of materials used, and the originality of the layout of the cella and the adyton).

The Temple was dedicated by the inhabitants of Philagia to Apollo Epicurius, the god-healer who had come to their aid when they were beset by the plague. Its ruins rise majestically to 1,130 m high in the mountainous region of Arcadia in the heart of the Peloponnese, near Andritsaina. Built in the second half of the 5th century BC (c. 420-410 BC?), it belongs to the first generation of post-Parthenonian edifices. Pausanias admired its beauty and harmony and, moreover, attributed it to the architect Ictinos, although contemporary archaeologists have been unable to provide confirmation.

With its elongated dimensions (39.87 m by 16.13 m), the peripteral structure is built mainly in grey limestone of local origin. The outer colonnade of the hexastyle temple respects an extremely strict Doric order (the metopes are not sculptured). Inside, however, fine-quality sculpturing blends with a more sophisticated architectural style. The front of the pronaos and the opisthodomos, with two in antis columns, restate the Doric order. In the cella, however, a series of embedded Ionic columns stand against low support walls. On the southern side, where an adyton is located, the last two Ionic columns standing in the cella at the far end of the oblique walls flank one Corinthian column which stands alone in the centre of the temple. The decoration is notable, particularly by virtue of the different materials used: the walls and the bases and tambours of the columns are limestone, and the Ionic capitals and the Corinthian capital are in Doliana marble, as are the sculptured metopes of the exterior frieze of the cella, the plates of the Ionic frieze which runs along the inside of the sanctuary, the guttae, the roof supports and the roofing tiles.

The capital of the central column of the Temple of Bassae is the most ancient conserved Corinthian capital, and as such the temple may be considered a model for all ‘Corinthian’ monuments of Greek, Roman and subsequent civilizations.

Being located away from the city, the temple long remained undiscovered. A French architect came upon it accidentally in 1765 and brought it to the attention of the academic world. The first archaeological investigation in 1812 was profitable but at the same time prejudicial for the integrity of the site. The discovery of the Ionic frieze’s 22 sculptured plates ultimately divested the site of these remarkable sculptures, which were acquired in 1814 by order of the future King George IV of England and transferred to the British Museum along with the Corinthian capital. Deprived of decorations of exceptional quality (a Centauromachy and an Amazonomachy), the Temple of Bassae was carefully restored in 1902, but in 1965 the critical state of the monument called for renewed renovation.

There is no selected car class in current office. Please choose another Class!
Select Vehicle